Degen Coin Flip has quickly become one of the favorite Solana on-chain games.

What Is Degen Coin Flip?

Degen Coin Flip is a Solana smart contract that enables users to play "Double or Nothing" with their Solana SOL tokens. The Degen Coin Flip game offers players a 50/50 chance of doubling their Solana SOL, similar to an actual coin flip. The coin flip game is decentralized and anyone can play it. As of September 2022, over 88,000 unique users have flipped 7.39 million times for more than $50 million at Degen Coin Flip.

How Much Does Degen Coin Flip Cost?

How To Play Degen Coin Flip

Anyone in the world with a Solana Wallet can play Degen Coin Flip.

You must use your Solana Wallet to connect to Degen Coin Flip. Always verify that you are on the correct site degencoinflip.com before signing and approving any transactions. 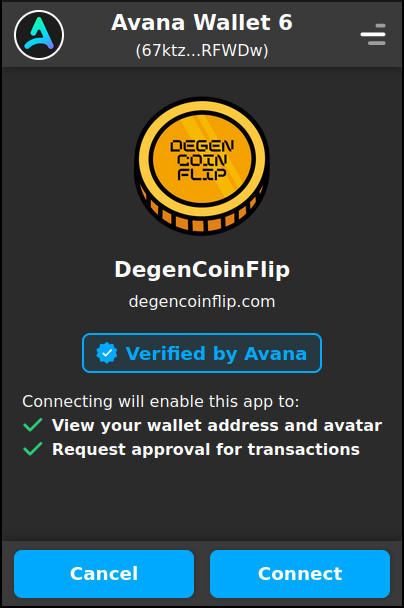 Degen Coin Flip requires you to sign a nonce to prove ownership of your wallet. This is safe - review the program instructions in Avana Wallet before approving. 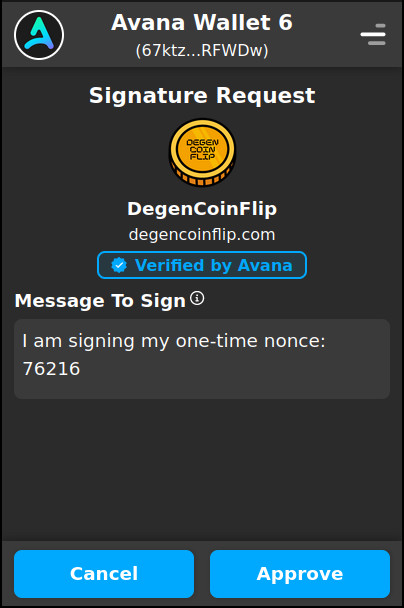 Choose heads or tails and an amount. Then flip the coin. 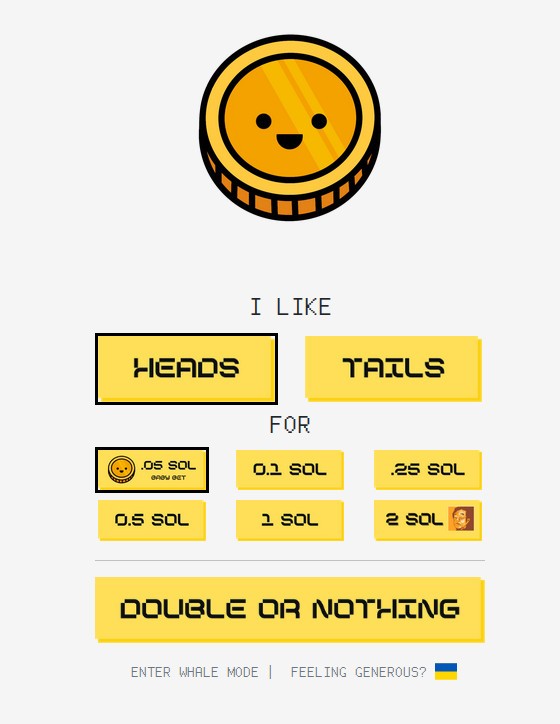 The Degen Coin Flip smart contract will immediately tell you if you won or lost. Remember, the chances of winning are 50/50. 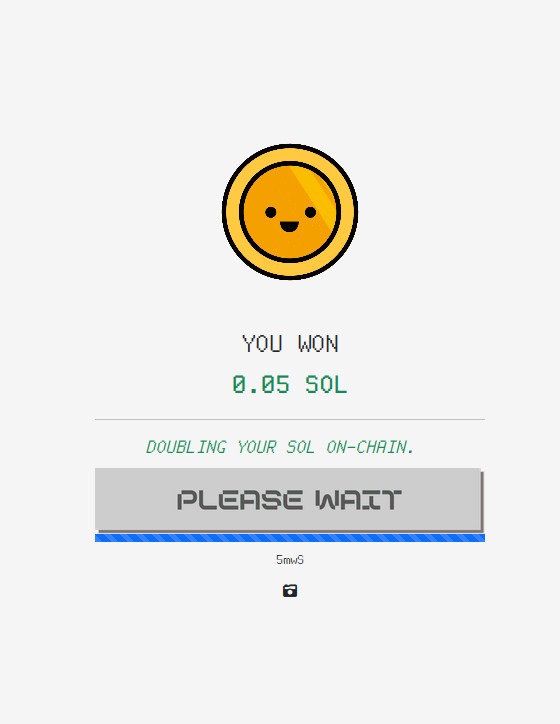 If you won you have to claim your reward from the smart contract. This requires signing another transaction. 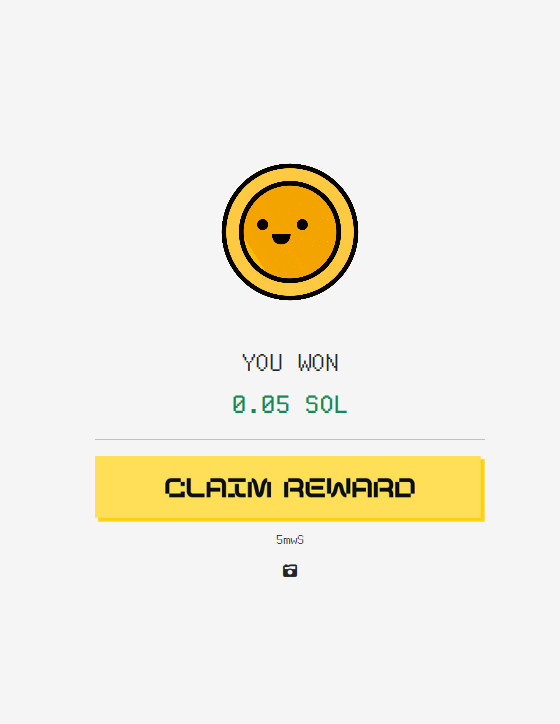 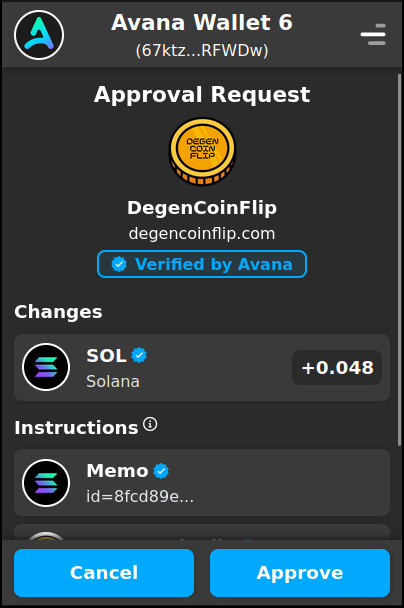 Only Wager Funds You Are Willing To Risk

Be careful using Degen Coin Flip and respect all local / federal laws where you reside. Only wager funds that are you able to risk. Remember, there is a 50/50 chance that you can lose.

"Degen Coin Flip is a smart contract that allows users to play Double or Nothing with their Solana tokens. Odds are 50/50 with a 3.5% fee that goes to DCF NFT holders. There will be 555 nfts at .33 sol."

Degen Coin Flip sold 555 DCF tokens for 0.33 Solana SOL each. 100% of fees generated from the game's coin flips will are sent to holders in perpetuity. On December 8, 2021 all of the Degen Coin Flip mint sold out within an hour.

The hype surrounding the game was strong from the onset. Within one day one million USD had been flipped.

Degen Coin Flip manages an active Mixpanel page with live game statistics. As of September 2022, the game has an on-chain track record of: 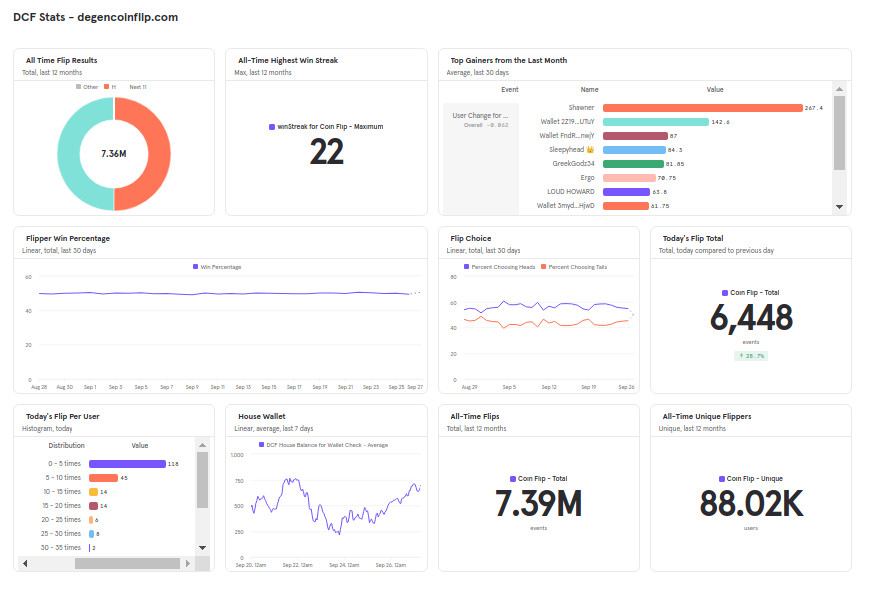 Another helpful link to track the game is hosted at DCF.finance.

All Solana smart contracts can be vulnerable to hackers. Degen Coin Flip was hacked on December 10, 2021 by a white hat hacker (two days after the mint). The Degen Coin Flip team patched the hack by December 11, 2021. No user funds were lost.

Degen Fat Cats is an art collection of 20,000 fat cats that benefit from supporting flagship crypto games and tools (view on Magic Eden). Degen Fat Cats' first contract was with Degen Coin Flip. Now, Degen Fat Cats has partnered with nearly 50 of the biggest and best projects and people across the Solana Ecosystem.

Degen Fat Cats partnerships bring a fun added utility to communities while helping them generate revenue for their projects.

Owners of Degen Fat Cats can receive fee payments from the partnerships. Currently it is estimated that the fee rewards APY for Degen Fat Cats is ~35% (given 17.5 Solana SOL floor currently).