What Is Solana GameFi? A Guide To Blockchain Gaming

What Is Solana GameFi? A Guide To Blockchain Gaming

GameFi is a term that refers to the combination of Web3 gaming and DeFi. GameFi is exclusive to Web3 applications, and it integrates NFTs and crypto tokens into games with the purpose of incentivizing gamers to play. Game assets such as the characters, their outfits, weapons, land, etc can be bought and sold for real money.

GameFi fundamentally alters the traditional gaming model of simply "winning" the game and paying to play online. GameFi enables players to “game for money” where they can be rewarded for the time they spend playing. Rather than earning virtual points in a game that have no tangible value, players can earn tokens and NFTs with real value in GameFi. Also, players have a chance to become stakeholders in the game and determine the future of the game by participating in game's DAO.

The decentralized nature of blockchain networks enables GameFi apps to be censorship-resistant. Traditional games are typically run on centralized servers controlled by a gaming company. The gaming company can choose who can play their game, and the company can modify the game state any anytime to the detriment of players. In contrast, GameFi digital assets owned by players can never be modified or confiscated by a centralized gaming company. 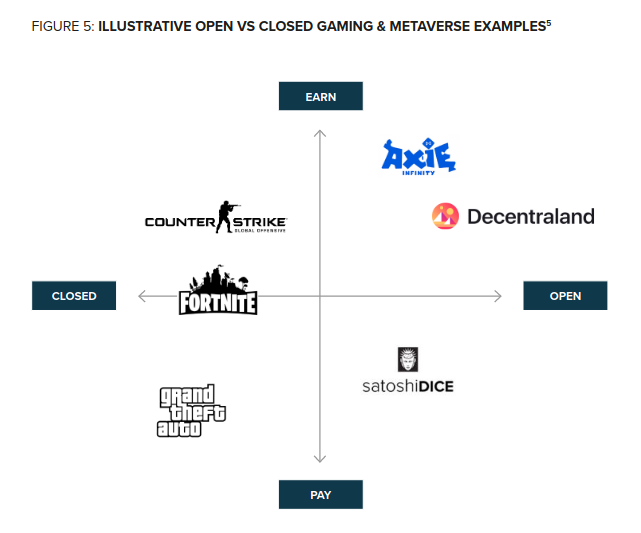 Gamers can earn money when they use GameFi apps. If a player spends time and resources building an asset in the game, that player can own the asset and earn money by monetizing it. For example, a player could build an awesome concert venue that charges other players entry fees. This concert venue could be bought and sold as an NFT digital asset. The owner could sell the rights to ticket revenue as a separate NFT or token, while maintaining ownership of the venue. The owner could also decide to rent the venue for regular income. Snoop Dogg recently announced he would host a concert in the Sandbox. This is likely just the beginning for arts, media and entertainment migrating to Web3 apps. 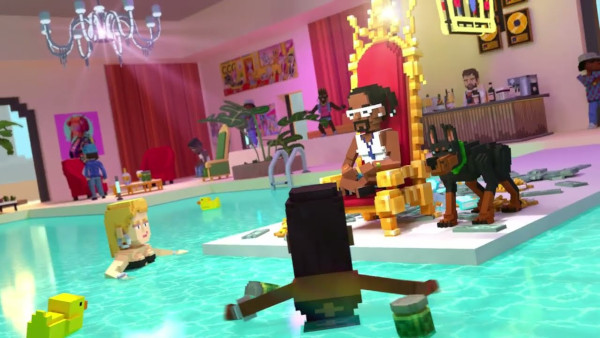 Game tokens are recorded on the blockchain and players can swap their native game tokens with other crypto tokens or fiat currency. Players can also create, win and utilize NFTs when playing the game. NFTs can also be exchanged for other digital currencies and fiat currencies, or sold online at an NFT marketplace such as Magic Eden. The market for in-game digital assets is real and growing. Millions of dollars of virtual land trade hands every week.

"If they help create part of the value of the gaming universe, maybe they should have a piece of it. I think this is just a next chapter in what our relationship is with our digital lives and the digital items that we accumulate.

"The idea of giving true ownership of these assets so that these assets are not siloed to one game environment or one server, and actually have real liquidity and value and can be traded, allows these players to actually earn and buy their way to the top. It’s pretty exciting. It’s kind of incredible how big this market is already."

Each game has its own unique structure and in-game economy. The methods that players can earn digital assets varies by game. They could build a castle on a piece of virtual land, win a fight, or find a hidden treasure when playing. For instance, popular games like Decentraland and The Sandbox enable on virtual land ownership, which is very similar to physical land. Players can rent their land to other players, build on the land, or simply speculate on its value.

Some play-to-earn games enable liquidity mining, which allows players to lend their digital assets and earn passive income. Also, players can influence the governance and future of the game by voting via DAOs. For example, Decentraland gamers can vote on in-game organizational policies based on the total number of MANA assets they own. The more MANA the player owns, the the greater voting power the player controls in the DAO.

An example of an early adopter success story is Axie Infinity, which started on the Ethereum network and experienced tremendous success and rapid growth. Axie Infinity surpassed one million daily active players for the first time on November 13, 2021, and by the end of November 2021 it had about six million players.

Axie Infinity token was one of the best-performing crypto tokens between June and October 2021 when the price increased from $4 to $160. Today, Axie Infinity has a market capitalization of $6 billion, which is down from its peak in late 2021. 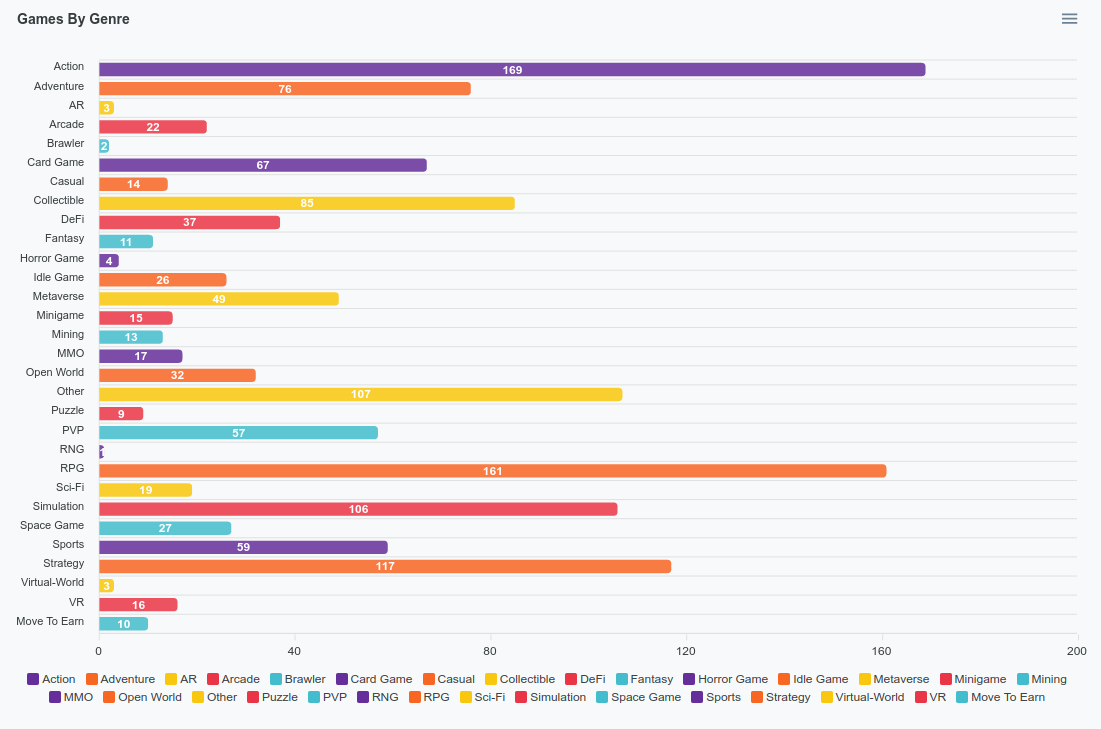 How Does The Blockchain Work With Gaming?

Game actions and state are recorded on the blockchain. This makes the record publicly visible and censorship-resistant. For example, in a Solana game when a user purchases a weapon that weapon's ownership transfer is recorded on the Solana blockchain. Anyone in the world could view this ownership record on Solana Explorer.

Gaming NFTs are similar to the ownership title for a house or car. The title holder proves ownership of the asset. Gaming tokens are similar to most crypto fungible tokens - the token can be bought, sold and swapped with other tokens or fiat currency.

How To Get Stared With GameFi

You can get started using GameFi apps with a few simple steps. Always be careful and do your homework before investing funds in a GameFi app.

Solana Will Be A GameFi Leader

Currently the Solana Ecosystem lists about 280 games. This number number has grown tremendously in just six months, and it will continue increasing. Check the ecosystem regularly for new updates.

“We just needed a scalable tech because we anticipate having millions to potentially billions of users interacting with the metaverse at some point. High transaction throughput, low transaction costs, the sub-second finality which translates to low latency for our players on speed changes, all important.”

GameFi is expected to be one of the hottest Web3 investment trends as more games integrate blockchain technology. Grayscale estimates that revenue from virtual gaming worlds could grow to $400 billion in 2025, from around $180 billion in 2020. 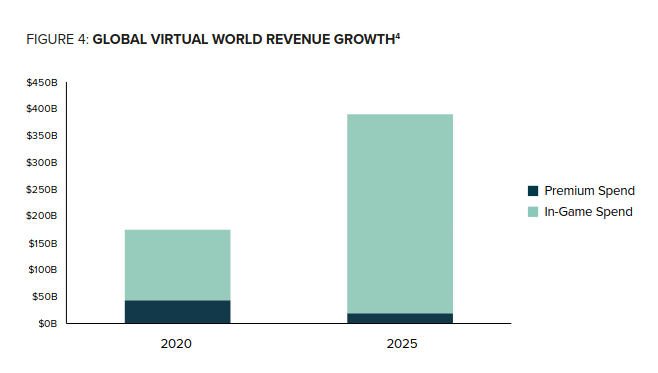 In December 2021, Solana Ventures, Forte, and Griffin Gaming Partners announced they would invest $150 million in blockchain games. Their aim is to invest in Web3 game developers who are building decentralized games on the Solana blockchain. Griffin Gaming Partners manages one of the largest gaming investment funds, and Forte is leader in gaming infrastructure and regulatory compliance. Both companies are focused on developing the Web3 gaming ecosystem.

Griffin has invested over $400 million into gaming and Web3 gaming-related companies over the past two years. Griffin is backed by over a dozen of the world’s premier gaming, media, and technology companies across Europe, the U.S., Asia, and the Middle East.

"Blockchain is enabling publishers to engage with their player bases in innovative ways. Where game developers once had to continuously create new content for players to consume as one-time purchases, with the advent of NFTs and other blockchain technologies, game developers can now offer their audiences real property rights and create self-sustaining and thriving economies within their games.

"Solana further pulls the future of blockchain gaming forward, as its ultra-fast and low-cost solutions ensure scalability, even at tens of thousands of transactions per second, making building games on Forte with Solana feasible and cost-effective for both developers and players. We are also honored to partner with Griffin Gaming Partners, which has an exemplary reputation in working with publishers to build the most forward-looking titles in the games industry"

In November 2021, Solana Ventures, FTX and Lightspeed announced a $100 million blockchain gaming fund. The fund will invest in Solana gaming projects. The fund has already made its first investment in Faraway, a Solana gaming company. 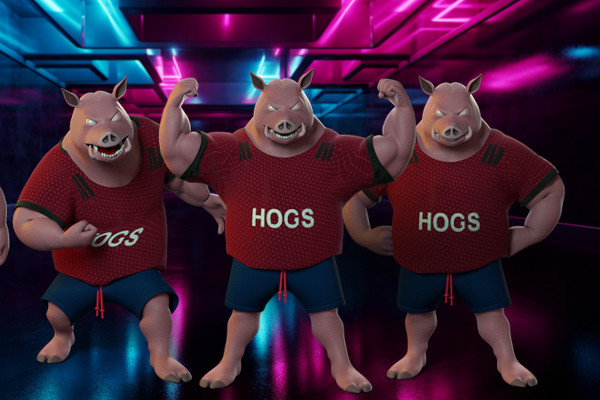 The Hoglympics (HOGS) is a next-gen crypto metaverse project incorporating esports with the Solana blockchain technology, NFTs, and decentralized finance to produce an immersive, play-to-earn Olympic soccer game. As the platform develops, more games will be added to the Hoglympics. 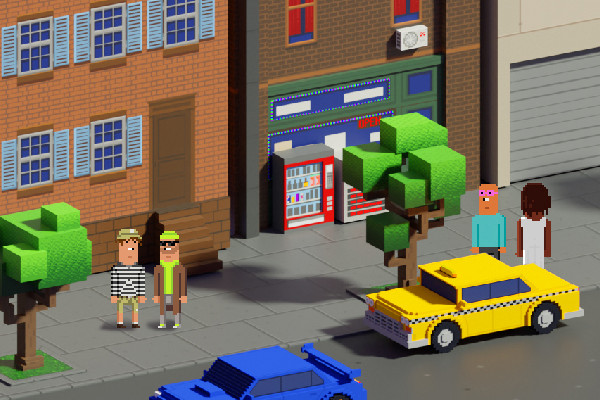 Chainers is a unique, hand-crafted 3D-pixeled world, allowing users to interact with millions of other players, earn, trade, stake, create and get benefits with highly profitable and player-oriented tokenomics. It’s all built using open-source technologies, so the players can join and play for free with just one click in their browser. Chainers - creating a new better society! 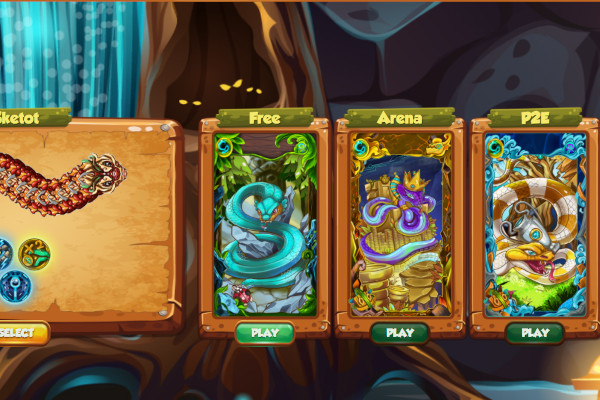 Naga Kingdom is a multiplayer survival game, under the NFT Gaming genre, built, developed and operated on the Solana blockchain. It is the combination between snake game and blockchain technology to open a new era of simple and exciting decentralized games. 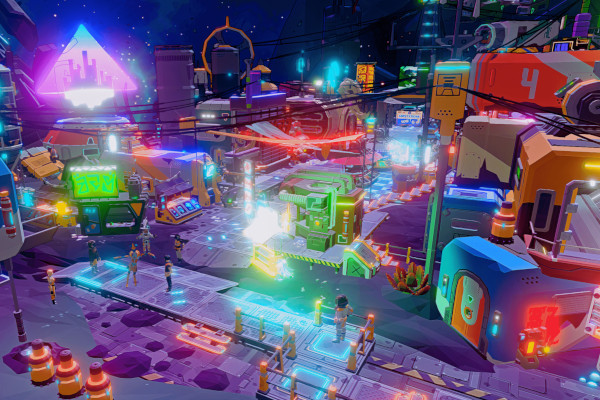 Welcome to MyCryptoCity, Play and relive in the exciting city of outer space, rise to build the greatest colony ever. MyCryptoCity is a simulation game that allows players to earn MYCTY tokens using the Solana infrastructure. The player makes his own decisions by performing many actions and actions from the administration panel. The player develops himself by trying to make the best use of many options such as resource use, planet exploration, colony management 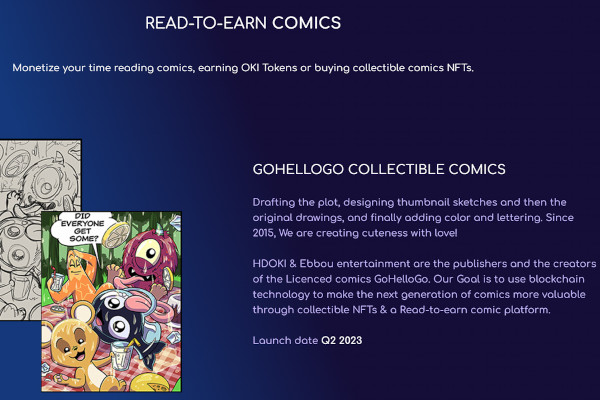 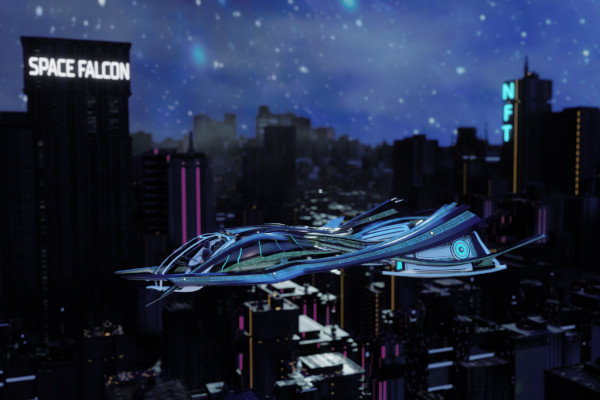 SpaceFalcon is a next-gen Intergalactic metaverse featuring the classic space shooter game and premium Sci-Fi NFTs from cosmos and beyond. Built on Solana Ecosystem for fast and low-cost transactions to ensure a lightning-fast experience for your space adventures. 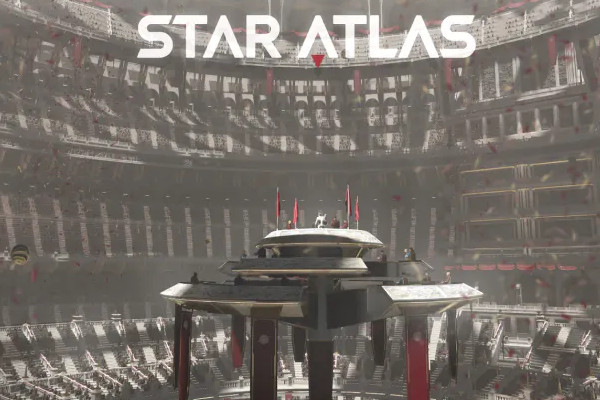 Star Atlas is developing a unique gaming experience by combining blockchain mechanics with traditional game mechanics and is proud to announce that it has selected Solana as the protocol to build out its metaverse. Solana launched the first ever “web-scale blockchain” in 2019 making it the only blockchain solution capable of hosting applications with the computational bandwidth akin to the modern internet, presenting the capability to power decentralized versions of Nasdaq, Facebook, Twitter and all other existing blockchains. Star Atlas fully embraces the potential of decentralized self-sovereign ownership of assets permitted through the implementation of blockchain into asset ownership and NFT marketplaces.

“Star Atlas will provide the most powerful opportunity in human history for players to realize economic benefits through the extraction of in-game virtual earnings into real-world income. This integration optimizes Star Atlas’ long term goals by plugging into Solana’s thriving community, ecosystem, and best in class technology. The overall vision for Star Atlas is not possible on any other blockchain.” Michael Wagner, CFA - Star Atlas, CEO.

Tribeland is a MMORPG Play-to-earn Metaverse, that will take players back to the land lost in time on Solana. 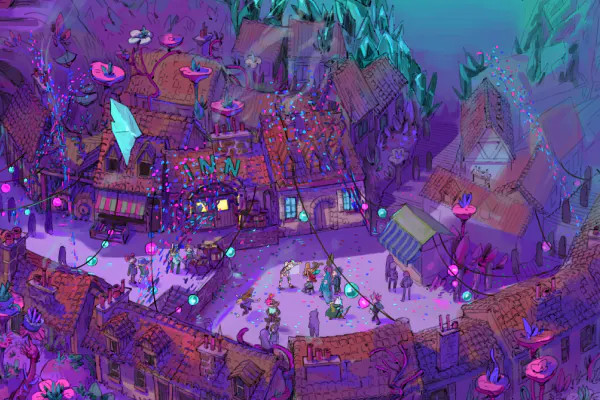 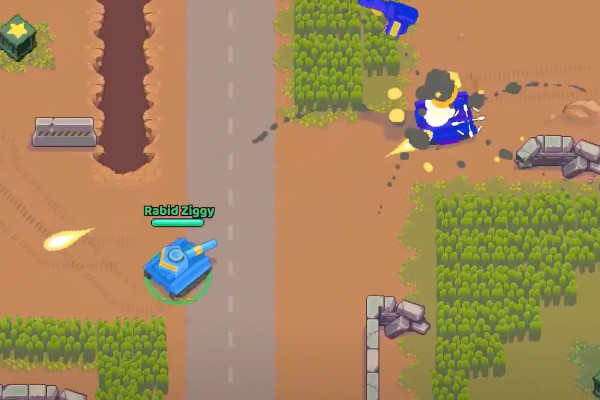 Ten-hut! Collect dogs, tanks and more in a multiplayer tank brawler. Truly own your own assets.